SIM is the EicasLab tool specifically conceived to perform the like real-time simulation of your overall control architecture.

The SIM tool is available in the EicasLab base.

SIM is an executable binary file, created through an assisted compiling process starting from the models designed with the SIMBUILDER tool.

The simulation of continuous-time systems is carried out by means of a fully original and proprietary procedure for the integration of the differential equations, specifically conceived and developed for overcoming the frequent difficulties met as a consequence of the numerical errors, which cannot be avoided even with the best techniques of numerical integration. EicasLab handles its proprietary procedure in such a way to make the integration error negligible. 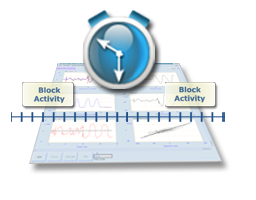 SIM is able to simulate any complex system architecture by means of the EicasLab scheduler which  allows to perform “like real-time” simulations: the EicasLab scheduler schedules all the activities and the data exchange among them according to the scheduling constraints set by the user in SIMBUILDER in order to respect the order in which these activities will be executed in the final target. Moreover, the EicasLab scheduler, being linked to the clock of the CPU, directly associates the period of each control function to the CPU clock. 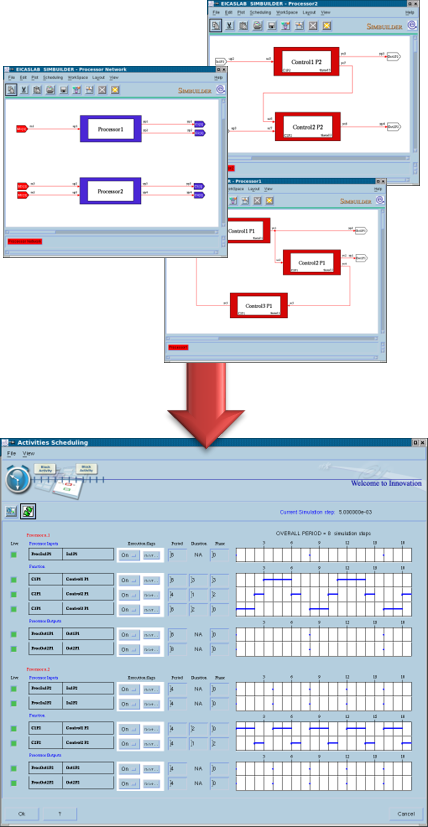 During the like real-time simulation SIM offers the possibility of plotting on the screen the trends of a pre-selected set of variables (up to 24 variables) and recording on the PC disk all the variables of interest, creating a set of data files called “POST files”, that can be offline analysed through the POST tool. 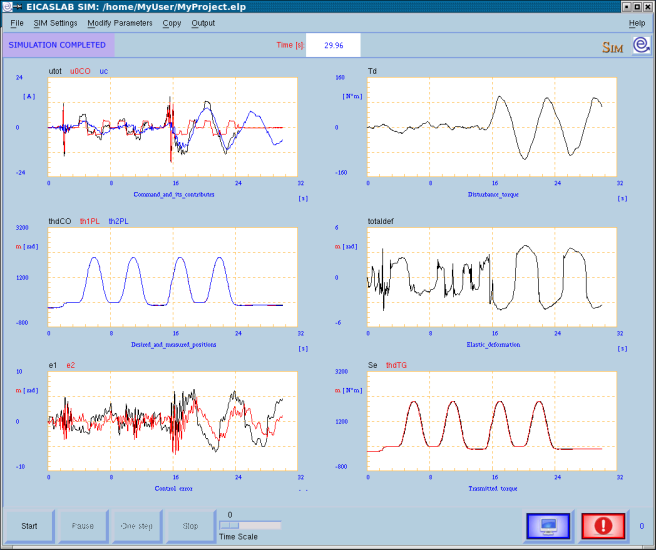 SIM provides the user with a friendly graphical user interface (SIM GUI) subdivided in sections, where a menu toolbar, a simulation control panel and 6 wide plotting areas provide all the necessary features to configure and support the simulation.

The menu toolbar allows to perform the following operations:

The user can access and modify the simulation configuration data by setting the simulation step, initial time and final time. The simulation step represents the time resolution applied in the overall activity scheduling while the initial and the final time indicate the simulation trial duration. Furthermore, the recording frequency of the POST files may be set for controlling the amount of data recorded on the disk.

In the control tuning activity, the user can perform simulations with different sets of parameter values  in order to verify and improve the control system performance. The new parameter values can be set directly in SIMBUILDER without leaving the simulation environment. When the SIM tool is open the SIMBUILDER tool works in the protected mode, in which the user can modify only the parameters of the project and cannot change the software algorithms or the system architecture. 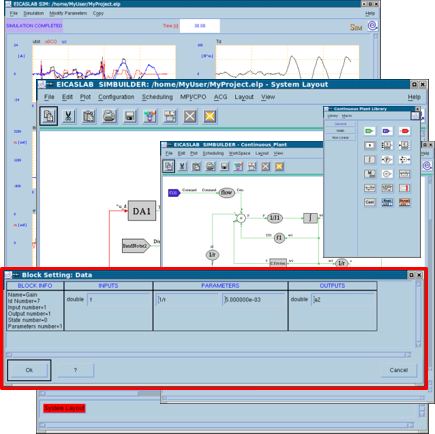 SIM allows the user to change the value of a set of pre-defined parameters during the like real-time simulation. The feature can be used, for example, to simulate and test the fault tolerance of particular control systems necessary by allowing to inject faults in the system during the simulation.

During the simulation execution, SIM provides a console window, where the SIM standard output is automatically redirected, displaying simulation messages for user convenience.

At the end of the simulation, SIM allows the user to copy the final states over the initial states, in order to restart the simulation from the time it was stopped. This is particularly useful for simulations taking long time.

The SIM tool may be easily integrated with the MPI/CPO tool to allow running a smart procedure for identifying the parameters of the plant model and/or optimising control parameters. 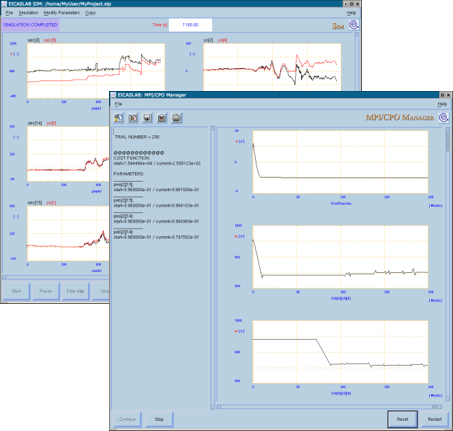